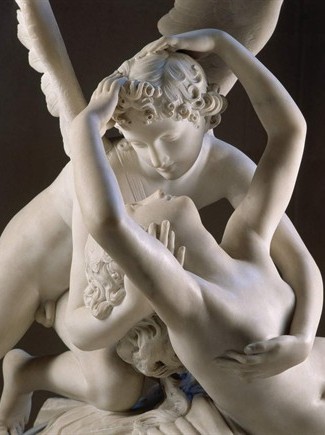 Thanks to the manager “Michele Torpedo”, to the orchestra, “which is 50% of the exhibition” and “a dream come true thanks Italy” is the reaction heat of the three interpreters Il Volo, after victory in the Sanremo Festival, before running back to the song Grande amore.

Italy – Operatic boy group Il Volo has won this year’s San Remo competition and therefore have been offered the chance to represent Italy in Vienna…which they appear to have accepted. They had 39% of the vote for their song ‘Grande amore ‘. In second place was Nek with 35% and third was Malika Ayane with 26%.

The story of Psyche

http://musee.louvre.fr/oal/psyche/mp3player.swf Click  to launch the audio
There were once a king and queen who had three very beautiful daughters. Psyche, the youngest and most beautiful of them, was venerated like a goddess by the local people.Jealous and infuriated by such blasphemy, Venus, goddess of Beauty, ordered her son Cupid to avenge her by making Psyche enamored of the lowest of all human beings. But at the sight of the beauteous mortal Cupid fell hopelessly in love. Psyche’s father, in despair at seeing his daughter unmarried despite her beauty, consulted the oracle of Miletus. The oracle predicted terrible disasters if the girl were not abandoned at once on a rock, where a monster would carry her off.

Alone and trembling on the rock, Psyche suddenly felt the caress of a light breeze: this signaled the coming of Zephyr, the gentle west wind. He bore her away to a marble palace covered with precious stones, which would now be her home.

Each night a mysterious visitor came to Psyche’s room and made love to her. But he forbade her to try to see his face.

One night Psyche, curious to see her lover’s face, lit her oil lamp as he slept and saw that he was none other than the god of Love. But a drop of burning oil suddenly woke him; and feeling himself betrayed, he fled.

Desperate, Psyche set out in search of her lost love. Venus inflicted terrible ordeals on her, leading her from the Underworld to Olympus. For the last of these ordeals, Venus sent Psyche to Proserpina, goddess of the Underworld, ordering her bring back a flask she should open under no circumstances. But Psyche, a victim of her curiosity, opened the flask. Inhaling the dreadful vapors, she fell into a deathly sleep. Cupid revived her by touching her with his arrow. Moved by such devotion, the gods finally granted Cupid Psyche’s hand. They gave her nectar and ambrosia, and this made her immortal. They then consecrated her goddess of the Soul.

Since ancient times Psyche has been depicted with butterfly wings. This is a reference to the dual meaning of her name, Psukhē, in Greek: soul and butterfly. Thus did the butterfly become the symbol of the immortality of the soul.

The story of Psyche symbolizes the ordeals the soul must undergo in order to achieve happiness and immortality.

Who are these beings?

http://musee.louvre.fr/oal/psyche/mp3player.swf Click  to launch the audio
This winged young man who has just landed on a rock where a girl lies unconscious, is the god Eros – Cupid in Latin – and can be recognized by his wings and his quiver filled with arrows. The girl’s name is Psyche. Cupid’s mother Venus, goddess of Beauty, demanded that Psyche bring back a flask from the Underworld, strictly forbidding her to open it.But Psyche’s curiosity got the better of her; and no sooner had she had breathed in the terrible fumes than she fell into a deep, deathlike sleep. Seeing her lying motionless, Cupid rushed to her and touched her gently with the tip of his arrow, to make sure she was not dead. This is the moment caught by the sculptor: Cupid lifts his beloved Psyche in a tender embrace, his face close to hers. Psyche lets herself sink slowly backwards, languorously taking her lover’s head between her hands.

Canova took his inspiration from a legend recounted by Latin author Apuleius in the Metamorphoses At the close of the tale the gods decide in council to grant Cupid Psyche’s hand in marriage, according her immortality and making her the goddess of the Soul.